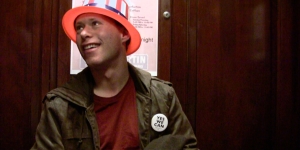 MALCOLM CLARK made three election-related trips to the States: for the Democratic Convention in Denver in August ’08; for the final two weeks of the campaign in Oct-Nov ’08; and for the Inauguration in Jan ’09.  He blogged his way through all three trips and his posts are found at   www.sixfiftyblog.com. He has since returned to America twice as a delegate at Netroots Nation, the progressive blogosphere/political activists’ annual conference.  Malcolm’s political connections with America do run deep, including a rather infamous relative …. one Henry Kissinger!

Malcolm’s passion is campaigning.  His American experiences – where campaigning seemed more visible, accessible and fun – have led him to try similar innovations here: ranging from a mass ‘zombie walk’ outside Parliament in a Halloween-themed demonstration; to popularising the playing of Debate Bingo during the Leaders’ Debates at the General Election.  His US election experiences also helped encourage and inspire him to step up to running for office himself -in the May 2010 local elections he stood as a Labour council candidate for the ward in which he lives.  Malcolm is also the co-ordinator of the Fairtrade London campaign.

THE BELL FAMILY reside in Cincinnati, Ohio.  Although involved in activism and local campaigns, they had never felt compelled to campaign in any National election until 2008, when their convictions for new leadership became a family passion and family project.

The Bell Family joined forces with Malcolm Clark during his American visit in the last days of the 2008 election campaign.  Together and separately they participated in ‘Get Out The Vote’ (GOTV) activities in the Cincinnati area.

MEGHAN HORVATH is a filmmaker based in London, most interested in stories that live just beyond the lens of the mainstream media. Identity is the thread which runs through the broad range of subjects Meghan chooses for her films.  She is interested in how we negotiate our individual identities in a seemingly connected world, and the ways in which the media influences this process.

In 2009 Meghan finished her first feature-length documentary The Middle Men, which explores the idea of ‘middle age’ and how men living and working in the UK are experiencing it.  The Middle Men won ‘Best British Documentary’ when it premiered at the 2010 London Independent Film Festival in April 2010.

Prior to moving to London to study at the London School of Economics in 2005, Meghan worked as an associate producer on Ken Burns’s The War documentary series which was broadcast on American public television and was an official selection at the 2007 Cannes Film Festival.

Meghan can be contacted via her website or by email.

DAIRE MOFFAT, editor of A Dollar & A Dream, is a filmmaker and musician based in London.